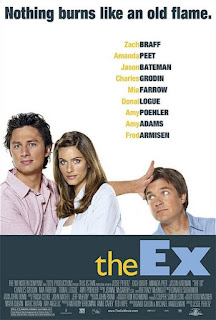 The Ex (2006)
Fast Track (original title)
PG-13 | 1h 29min | Comedy, Romance | 11 May 2007 (USA)
Director: Jesse Peretz
Writers: David Guion, Michael Handelman
Stars: Zach Braff, Amanda Peet, Charles Grodin
Story:
In Manhattan, Sofia’s an attorney and Tom’s a cook who has a hard time holding a job. When their first child is born, they agree that she’ll be a full-time mom and he’ll get a promotion. When he gets fired, he takes a job in Ohio working at the ad agency where her father is assistant director. Tom’s assigned to report to Chip, a competitive, hard-driving guy who’s in a wheelchair and who’s Sofia’s ex-boyfriend – from high school. Chip still carries a torch for her, so he connives to make Tom’s work life miserable. As Tom’s frustrations mount, it may be that Sofia will take Chip’s side. Is Tom doomed to fail yet again?