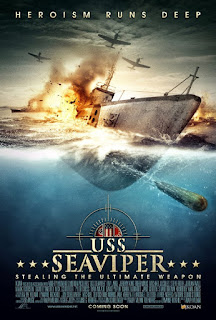 USS Seaviper (2012)
1h 42min | Action, Drama, War | 28 May 2012 (UK) | IMDB | 2.5/10 Score
Director: Ralph A. Villani
Writer: Lynanne Rockhill
Stars: Tim Large, Jeremy King, Robb Maus
Storyline:
The German U-Boat, U-234, from the Port of Kiel is trading cargo with the Japanese. USS Seaviper must locate and stop this dangerous exchange. The Captain of USS Seaviper must go ashore to conduct reconnaissance on an island near Sumatra, but the ship is left in the hands of Mister Cutter, after the Executive Officer is injured in battle. A conflict between Cutter and the Chief of the Boat puts the submarine in jeopardy. Seaviper is trapped below the surface, with decreasing oxygen, and a Japanese destroyer hunting them from above. Damage to the boat also leave her survival in question. They must fight the Japanese destroyer and get the information about U-235 back to Pearl Harbor.